“The Village Bank is a strong strategic and cultural fit for us and I am truly excited about the positive impact our combined company will have in the St. Libory, New Athens, and Marissa communities. Together, we have the capabilities and scale with a community-based model to help us better serve new and existing customers, businesses, and communities. We believe that we are stronger together,” said Rick Parks, President, and CEO of First National Bank of Waterloo.

The partnering of First National Bank of Waterloo and The Village Bank is expected to:

(O’FALLON, Ill., – June 29, 2022) The First National Bank of Waterloo’s new banking center in the heart of the O’Fallon-Shiloh retail district will be open for business on July 11 th .

The center is located at 1177 North Green Mount Rd., across from Dierbergs Crossing and adjacent to the Shoppes at Richland Creek. This more prominent location with easy access to I-64 will make it more convenient for our customers to bank with us while running their errands.

The new two-story location is also home to a commercial real estate business and a title company, making it a financial destination for more than just banking.

“First National Bank of Waterloo and The Village Bank are two relationship-focused community banks that have rich histories, compatible cultures and shared commitment to helping our clients achieve financial success. We believe that we are stronger together and can better serve the needs of our customers and our communities through this merger. We also believe that The Village Bank customers will benefit greatly from the expanded products and resources First National Bank is able to bring to the table.” states Rick Parks. 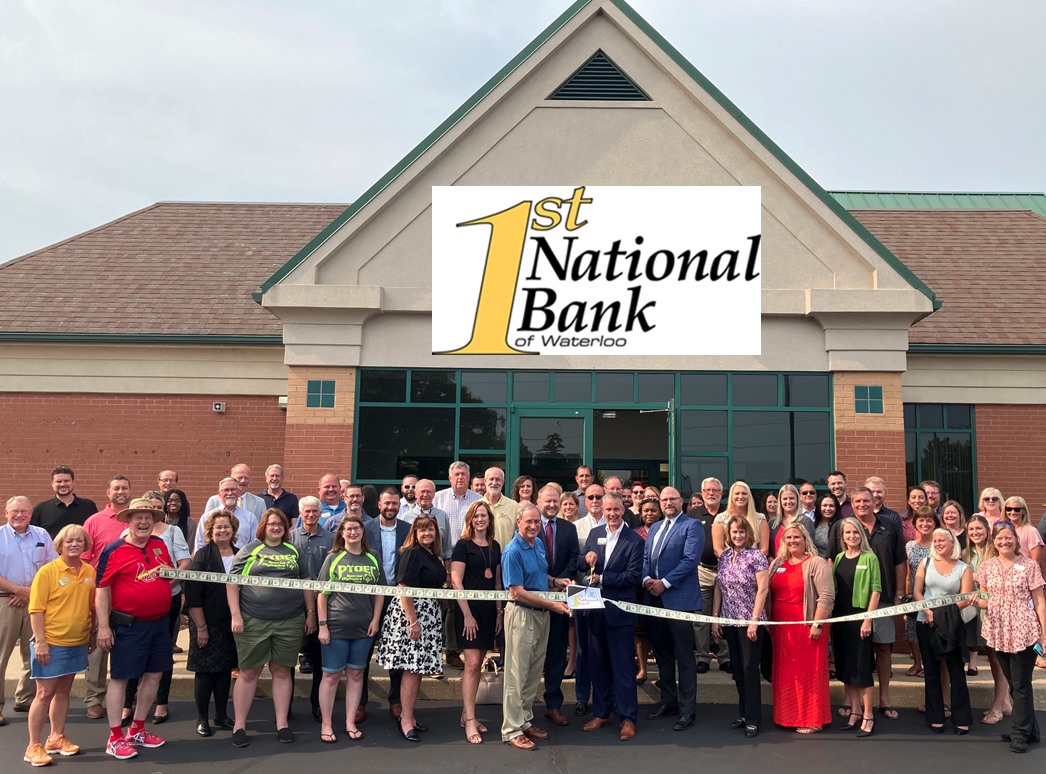 The Swansea Banking Center is located at 4101 N Illinois Street. Swansea Mayor, Mayor Leopold, and several Chamber members of both the Metro-East Regional Chamber and O’Fallon-Shiloh Chamber of Commerce attended the event.  Several staff members, Board members and business colleagues were also in attendance to help celebrate this momentous occasion.   As part of the ribbon cutting, First National Bank of Waterloo also presented a donation to the PTOEC (Parent Teacher Organization for Exceptional Children), showing their dedication and support to the community. 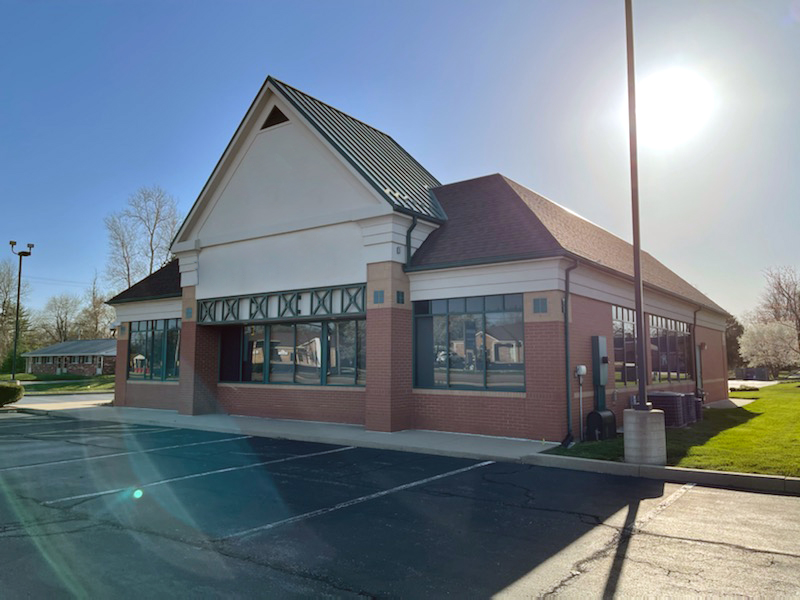 (Swansea, Ill., – April 1, 2021) First National Bank of Waterloo has announced it will be opening its fourteenth banking center. The new location will be in Swansea, Illinois.

“First National Bank of Waterloo is excited to become part of Swansea and to serve the banking needs of that great community with our first-class, personal service,” says President & CEO, Rick Parks. “We had a loan production office in Swansea years before opening our O’Fallon, IL banking center, so we are excited to soon offer a full-service location here. This expansion allows us to better serve the businesses and residents of St. Clair County from a convenient Swansea location.”

LaPlantz joined the bank in August 2011 and has consistently been one of the bank’s highest producing lenders, especially in developing commercial banking relationships.

“As with most banks, loans are our largest earning asset and Mark will oversee all areas of our lending function,” said Rick Parks, First National Bank of Waterloo President. “He is well-respected in the business community and has the skills to lead us forward. I am confident in his abilities and we are grateful to have him in this position.”

RICK PARKS ELECTED TO ILLINOIS BANKERS ASSOCIATION BOARD OF DIRECTORS 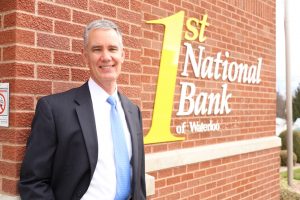 SPRINGFIELD, ILLINOIS – Rick Parks, president and CEO of First National Bank of Waterloo, has been elected to serve on the Board of Directors of the Illinois Bankers Association (IBA). The election was held on June 16 during the organization’s virtual Annual Conference.

Parks has over 32 years of banking experience in the Metro-East area. Most of his focus has been in commercial banking, lending and cash management with small to medium sized banks including Magna Bank (n/k/a Regions Bank), Centrue Bank, TheBANK of Edwardsville (n/k/a Busey Bank) and now with First National Bank of Waterloo.

“The same employees that customers enjoyed working with at Best Hometown Bank will still be there,” said Parks. “Best Hometown Bank has been serving the Madison County area for over 133 years. We value that history and are excited about the opportunity to build on the strong tradition. First National Bank of Waterloo has been serving its customers for 108 years and for all the reasons people were Best Hometown Bank customers, we think they’ll feel right at home at First National Bank of Waterloo, and we look forward to giving them many reasons to proudly say, ‘That’s My Bank!’”

“This expands our organization into Madison County,” said Hemmer. “Best Hometown Bank has been serving the Madison County area for the past 133 years and we are excited about the opportunity to partner with them and to build on their tradition.” Hemmer noted that Best Hometown Bank would remain a separate bank until systems are converted later in the year.

“This is a bitter sweet day, as we move forward under different ownership; however, we are confident we have found a great partner,” said Ron Shambaugh, President & CEO, Best Hometown Bancorp, Inc. “We are looking forward to expanding our product offering and to having increased lending limits. It is truly amazing how similar the philosophies are of the two organizations.”

This press release contains forward-looking statements. Any statements about our expectations, beliefs, plans, predictions, forecasts, objectives, assumptions or future events or performance are not historical facts and may be forward-looking. These statements are often, but not always, made through the use of words or phrases such as “anticipate,” “believes,” “can,” “could,” “may,” “predicts,” “potential,” “should,” “will,” “estimate,” “plans,” “projects,” “continuing,” “ongoing,” “expects,” “intends” and similar words or phrases. Accordingly, these statements are only predictions and involve estimates, known and unknown risks, assumptions and uncertainties that could cause actual results to differ materially from those expressed in them. Our actual results could differ materially from those anticipated in such forward-looking statements, including as a result of factors outside First Waterloo Bancshares, Inc.’s or Best Hometown Bancorp, Inc.’s, control, such as economic and other conditions in the markets in which the companies and their subsidiary banks operate; inability to complete the transaction announced today or delays in completing the transaction; managements’ ability to effectively execute their respective business plans; inflation, interest rate, cost of funds, securities market and monetary fluctuations; changes in laws and regulations; and competition. All forward-looking statements are necessarily only estimates of future results, and there can be no assurance that actual results will not differ materially from expectations, and, therefore, you are cautioned not to place undue reliance on such statements. Further, any forward-looking statement speaks only as of the date on which it is made, and we undertake no obligation to update any forward-looking statement to reflect events or circumstances after the date on which the statement is made or to reflect the occurrence of unanticipated events. 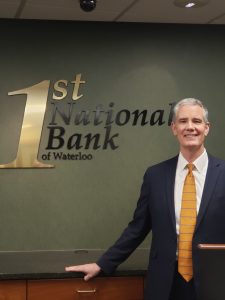 (Waterloo, IL – January 27, 2020) The First National Bank of Waterloo and Robert Hoffmann, Chairman of the Board, announced that Rick Parks will succeed Gary Hemmer as the bank’s president.

“We are delighted to have Rick Parks join the First National Bank of Waterloo as the new president,” said Hoffmann. Parks will become the bank’s ninth president spanning the bank’s history of 108 years.” 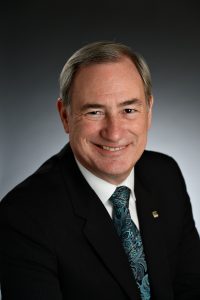 (Waterloo, IL – January 21, 2020) First National Bank of Waterloo and President and CEO Gary Hemmer announced his intention to retire on June 30, 2020.  Hemmer began his tenure with the bank more than twenty years ago on July 1, 1999.

“Hemmer has provided strong and steady leadership over the past 21 years as President and CEO of First National Bank of Waterloo,” said Robert Hoffmann, Chairman of the Board of Directors. “Under his tenure, the bank has grown from about $150 million in assets with three banking centers to about $600 million in assets with 13 banking centers at the time of his retirement.”

“It has been a real privilege to work for one of the premier financial institutions in Southern Illinois. I am proud of our organization, our board of directors, our staff and our advisory boards,” said Hemmer. “Banks are the economic engines that enable communities to grow.  They help people and businesses realize their dreams.  I am proud to have served this industry and to have been a banker. It has been a privilege to work with a great board of directors that has helped guide and direct this organization. It has been an honor to work with the bank’s outstanding staff which is to be credited with the success of the bank.  It has been a joy to serve our customers who are also our friends.”

Hoffmann said the Board of Directors has created an executive committee to identify Hemmer’s replacement and that announcement will be made shortly. Hemmer will remain on the Board of Directors and will assume the role of Chairman of the Board at this year’s Annual Meeting in February. Hoffmann plans to retire from the board and will become Director Emeritus.

Ready to get started? Click the button below to apply today!

From time to time, we provide links to other websites for the use of our visitors, which have been compiled from internal and external sources. By clicking “Continue” below, you will be opening a new browser window and leaving our website. Although we have reviewed the website prior to creating the link, we are not responsible for the content of the sites.

Information on linked website pages may become dated or change without notice, and we do not represent or warrant that information contained on these linked pages are complete or accurate. We suggest that you always verify information obtained from linked websites before you act upon such information.

The privacy policy of this bank does not apply to the website you visit. We suggest that you always verify information obtained from linked websites before you act upon such information.